Corriboard is based on Polypropylene/ethylene copolymer. Various grades of sheet may contain traces of process residues and may also contain minor amounts of materials such as antioxidants, anti-static agents and UV additives.

Special boards can contain large amounts of additives and the general comments made will also apply to these materials. Polypropylene has been safely used in large quantities and in a wide variety of applications since the early 1960s.

Polypropylene is chemically unreactive and is generally regarded as being biologically inert. 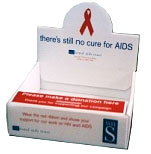 There is no release of any noxious fumes from Corriboard at ambient temperatures.

Although Polypropylene is inert and can be regarded as harmless, certain boards do contain additives which could be harmful and any ingestion should be avoided.

Corriboard is not considered to be a skin sensitisers, but being fairly hard, cut edges can have an abrasive effect on the skin.

The pigments are totally encapsulated in the extrusion process and thus the material does not present any unusual handling hazard.

When Polypropylene is heated in air, melting will occur at 165/170°C and decomposition will commence at about 330°C with the release of volatile, lower molecular weight hydrocarbons. These can be ignited by a flame or radiant heat source. Once ignition occurs, sufficient heat will be generated to continue decomposition and provided sufficient oxygen is present, burning will continue, accompanied by the release of flaming, molten droplets of polymer.

Like many other organic materials, Polypropylene will burn to produce carbon monoxide, carbon dioxide, water and carbon (soot), along with a considerable number of breakdown and oxidation products normally in very low concentrations. These can include certain aldehydes such as formaldehyde and acrolein.

Should a fire involving Extruded Polypropylene Sheet occur, any commonly available extinguisher may be used. Powder extinguishers are very effective in quenching flames.

The fillers are totally encapsulated in the Polypropylene extrusion process and thus the material does not present any unusual hazard.